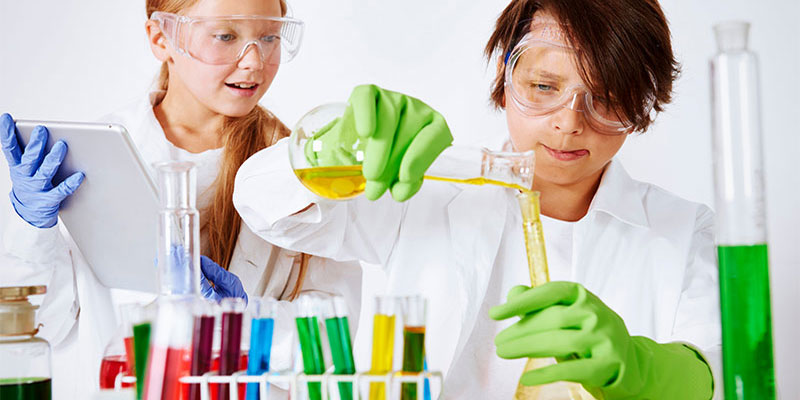 Due to the social distancing because of COVID-19, families have been finding new and creative ways to turn their homes into everything from a school, to a playground, to a movie theatre. Today, we're going to talk about turning your kitchen into a laboratory. Opportunities for learning are everywhere! So, let's take a look at 3 classic science experiments you can do with ingredients you probably have in the kitchen right now!

This is probably the most classic, often made, and iconic kitchen experiment of all time. Made by combining baking soda and vinegar, this experiment uses a chemical reaction to simulate the raw power of an erupting volcano.

Mixing baking soda, or sodium bicarbonate, with vinegar, or dilute acetic acid, transforms these two substances. The molecules mix together and create carbon dioxide gas (the same gas we produce in our bodies when we exhale) and liquid water. The gas separating out of the baking soda and vinegar combining is what makes the explosion, much like boiling water when the steam escapes the surface tension of the liquid water.

Kids love this experiment because it gives them permission to be as messy as Mother Nature herself! Baking soda volcanoes are the definition of making learning fun. Of course, a real volcano has a lot more going on than a simple chemical reaction. You can read more about volcanoes in our blog post, Five Facts About Volcanoes.

The favorite experiment of aspiring sleuths, creating invisible ink can make any child feel like Enola Holmes or Harriet the Spy. Invisible ink has been made by different cultures for hundreds of years, and there are many recipes. The easiest to try first can be made by mixing lemon juice and water, which dries clear and only appears when heated.

When lemon juice is subjected to heat, like the ambient heat of a lightbulb, a process called oxidization happens to the juice. This causes the juice to turn brown and your secret message becomes visible. Siblings can have tons of fun hiding secret messages to each other around the house, or leaving notes for friends in common spots around the neighborhood. It's a great excuse to get up to some parent-approved mischief!

Subscribers to our YouTube channel are already familiar with cornstarch quicksand. This fascinating experiment creates a substance which is often called "Oobleck,” named for the strange green substance from the classic Dr. Suess book, "Bartholemew and the Oobleck." Because of this, people traditionally mix a few drops of green food coloring into their cornstarch quicksand to match its literary counterpart.

Cornstarch quicksand is defined as a non-Newtonian fluid, referring to the scientist Isaac Newton. Non-Newtonian fluids behave both as solids and liquids depending on how they're handled. Oobleck can pour like a normal liquid, but when exposed to pressure, it reacts like a solid. Small batches of Oobleck can be hit with a hammer and not move. For a bigger experiment, an entire wading pool can be filled with Oobleck and kids can experience the strange sensation of walking on top of a liquid. There are tons of other fun things that can be done with Oobleck, so whip up a batch and start playing!

We hope your little scientists-in-training have some fun with these cool kitchen experiments!