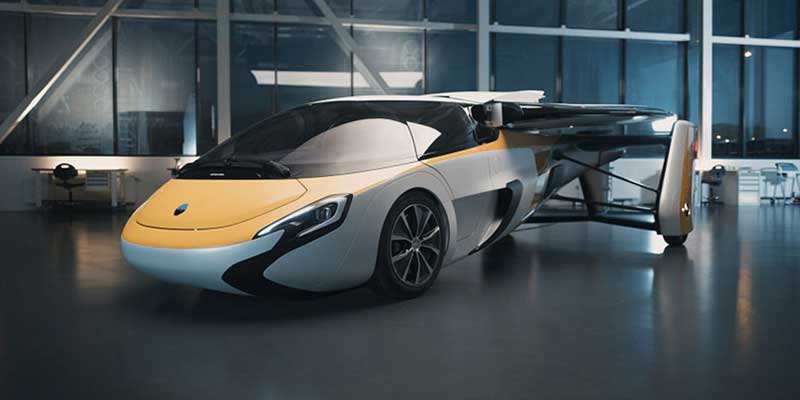 You may laugh, but this is going to be true one day. "They are going to be our future of transportation," according to Henry Ford in 1940, predicting the arrival of a machine that was part automobile and part airplane. For decades flying cars have been an obsession to technologists, but only desired for their mastery. Finally, there is the reason to believe; after several firms have offered hope that flying people in small pods for short trips might turn out to be a reality within the next decade. These are not cars, as they are not fit to drive on land, but rather small vehicles, which can rise and land upright, like quiet helicopters.

Aeronautical engineer, Ted Hall, created two prototypes of the ConvAir car. Unfortunately, a crash landing due to low fuel caused the hybrid vehicle's manufacturer, Convair, to lose attention and interest and he shut down the venture within a year. While there have been frequent attempts since, none have gone any further than the experimental stage. That is about to change thanks to a slew of new and recognized companies which are determined to make this 70-year-old quest a reality.

On April 25th, The California-based start-up company Kitty Hawk made headlines on the unveiled video they shared about a flying vehicle that will be available before the end of the year. It is a single-seater, propeller powered by Kitty Hawk Flyer and is classified as an ultra-light aircraft by the Federal Aviation Authority (FAA). Though it is only approved for recreational flying in uncongested areas. While the jet-ski-like vehicle, which can only be flown over water, is not fairly the futuristic flying commuter car one would have envisioned, Kitty Hawk says that they have to work on other models in the works.

The Slovakia-based company AeroMobil has announced that it is accepting pre-orders for its namesake hybrid vehicle since April 20th, which is scheduled to release by 2020. The sleek prototype, unveiled at the ultra-fancy Top Marques Monaco auto show, transforms from car to airplane in less than 3 minutes and needs just a few hundred meters of pavement or grass to take off and land. The twenty-foot-long gas-powered vehicle's foldable wings can be neatly tucked by its sides when it is on the ground.

The AeroMobil boasts a top ground speed of 99 mph and air speed of 224 mph and it can fly up to 435 miles on a single tank of gas. This vehicle comes with many safety features, which include a parachute for emergency landings as well as airbags to protect the passengers from of both road and airborne crashes. Of course, at a price of $1.3 million USD, you most likely will not see too many of them flying around.

Pop.Up was introduced by a French aircraft manufacturer Airbus at the Geneva Motor Show on March 8th, this is a battery-operated smart vehicle that can be used on ground and air. Airbus visualizes that during heavy traffic, the self-driving husk will make its way to a dock area where a buzz with four rotors will join and airlift it off the Earth. Even if it sounds exciting, Pop.Up is currently just a concept and Airbus is giving any insights into when this fantastic car or airplane will come into reality.

Transition was unveiled by Massachusetts-based start-up Terrafugia and has been trying to build a flying car since 2006. This being the latest model of their fully independent hybrid vehicle, Transition has a range of 500 miles and is predictable to come to market by 2023. Earlier this week, San Francisco-based Uber, which is proved to be pioneered in ride-sharing has joined the fray with a statement that it had partnered with Dallas and Dubai to roll out a fleet of flying cars by 2020.